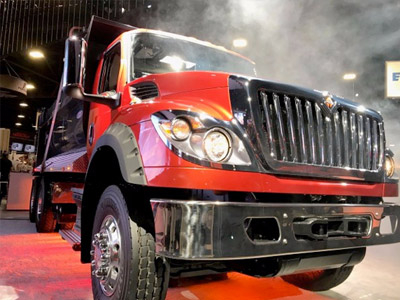 The truck will come with the International A-26 engine, and was designed with uptime in mind, says Denny Mooney, senior vice-president of global product development. It was also designed to be more body-builder friendly, with the Diamond Logic electrical system that allows for multiplexing and easier integration of truck bodies. The truck features a completely redesigned interior.

“This vehicle was designed from the inside out,” said Mooney. “You have to get inside to appreciate what we’ve done.”

Mark Stasell, vice-president of vocational trucks with Navistar, said the door has been redesigned with more stiffness to provide better sealing. This has reduced air leaks and wind noise. More than 100 customers were consulted during the redesign. The window belt line was lowered for improved visibility and the vent window post was also eliminated.

Side mirrors were pushed forward, so less head turning is required when checking them – 15% less to the left, and 5% to the right. The premium gauge cluster was borrowed from the LT highway model. There’s a customizable display in the center, where drivers can view items such as fuel economy, virtual air gauges, or axle loads.

A new stalk shifter was designed for the steering column, and a center vent was added to provide better cooling in three-man operations. The truck also gets an improved HVAC system, with a max defrost feature that quickly clears the windows.

Mooney also mentioned a redesigned LoneStar is now available. It has adopted the LT series interior, which has so far been well received by customers.