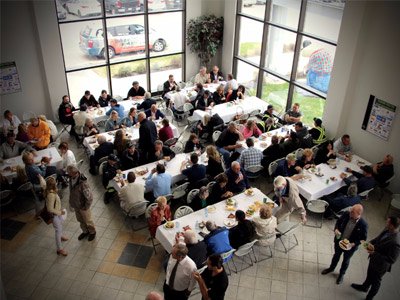 At Maxim’s Charity BBQ held on May 25, 2017 in Winnipeg, over 800 participants helped raise $25,500 for Charity. Both the number of attendees and the funds raised are a record for the long-standing annual event.

Maxim has been a long-time supporter of many charities including those funding community organizations, the arts, amateur sports and health.

All funds raised during this year’s event will go to CancerCare Manitoba Foundation through their “Challenge for Life” campaign.

Maxim has 35 walkers and 35 volunteers participating in CancerCare Manitoba’s annual Challenge for Life 20 Km walk on June 10, 2017. With proceeds from the BBQ, the Maxim “Team”, led by Doug Harvey, has now raised over $130,000 towards this year’s Challenge for Life event.

“I’m proud of the staff, customers, suppliers and friends who continually support and participate in charitable events like our BBQ and the Challenge for Life walk,” says Doug Harvey. “Giving back is part of our culture at Maxim.”