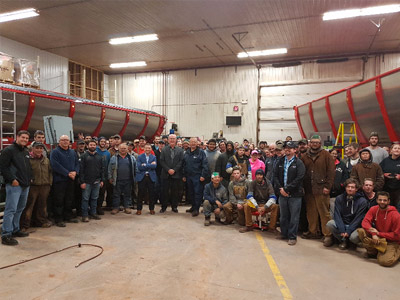 Doug Harvey, President of Maxim Truck & Trailer today announced the acquisition of a majority interest in Trout River Industries, a leading manufacturer of live bottom and shuttle floor trailers located in Coleman, PEI. Darrin Mitchell and Harvey Stewart will continue to manage Trout River’s operations out of its current facility and will continue to be shareholders of the company.

“From the formation of Trout River Industries in 1999, I’ve had great partners,” says Harvey Stewart. “I believe today’s announcement represents an unbelievable partnership that’s going to take us to the next level.”

The acquisition of Trout River in Eastern Canada complements Doug Harvey’s ownership of Arne’s Welding Ltd, a Winnipeg manufacturer of resource industry dump and lowbed trailers with a strong presence in Western Canada. Butch Bouchard is the managing partner of Arne’s.

To capitalize on the respective strengths of both trailer manufacturing companies, MANCO Manufacturing has been established to oversee the manufacturing arm of Doug Harvey’s enterprises. Heading Manco Manufacturing will be André Granger, who has a track record of designing and implementing global sales and marketing plans and executing corporate growth strategies.

“The role of Manco is to leverage our combined manufacturing expertise to innovate and deliver more products and technologies to our customer base in an ever evolving marketplace,” says André Granger. “We also want to expand our distribution to deliver these products across the globe.”

Doug Harvey began his career as an International Harvester Sales Rep in 1977. He purchased his first International Dealership in 1981. His business enterprises include an established Retail & Distribution arm and now a distinct Manufacturing arm with the acquisitions of Arne’s Welding in 2006 and today’s Trout River Industries majority stake. His business entities employ over 760 staff from BC to PEI and he continues a methodical expansion of his enterprises as opportunities are identified.

“I’m excited at the opportunity of marrying  a manufacturer like Trout River in the East who make the best live bottom trailers with a manufacturer like Arne’s Welding in the West, who make the best steel dump and lowbed trailers,” says Doug Harvey. The deal brings together products, geographic efficiencies and most importantly people. “It is my experience that great people make great products.”

Click here to see a video version of this News Release.