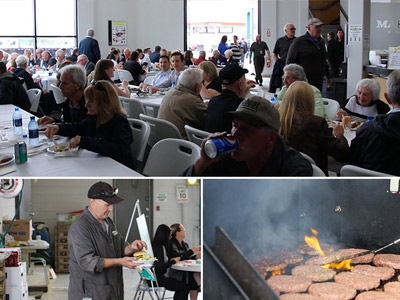 All funds raised during this year’s event will go to CancerCare Manitoba Foundation through their “Challenge for Life” campaign.

Maxim has been a long-time supporter of many charities including those funding cancer research. Doug Harvey, President of Maxim Truck & Trailer, is also the current chairman for the CancerCare Manitoba Foundation. Within the past year, Doug has experienced his own battle with cancer. He shared his “journey” with cancer with over 800 prominent Manitobans when he delivered the keynote address at CancerCare Manitoba’s Gold Plated Evening Fundraiser in April of this year.

“I’m proud of the staff, customers, suppliers and friends who continually support and participate in our annual charity events like our BBQ,” says Doug Harvey. “I can tell you first hand that the funds raised are being put to good use.”

Thank you to everyone who supported the event to help make it such a huge success.