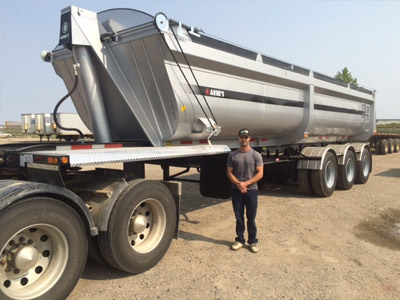 Jeff listened to people claim for years that it was too difficult to eat well or stay in shape while on the road. Just because long haul trucking is a sedentary job, doesn't mean that health has to drop off the priority list.

Jeff recommends incorporating exercise into what you’re already doing. Keeping it simple helps you build a routine and means you have no excuses when it comes to physical activity.

Many people feel that if they can’t go to the gym, they can’t work out. Jeff puts this notion to bed by doing body weight exercises (like pushups or situps), jogging, and walking. Instead of sitting in the TV room at a truck stop, going for a jog will get your heart pumping and your metabolism moving. When you’re in your truck, keep yourself moving. Many exercises can be done while you’re sitting and driving.

Another barrier Jeff notices with exercise is that people don’t know how to do an exercise. Jeff is working on some videos with Destination Health, breaking down exercises for beginners. He’s been on the Destination Health podcast a few times, which airs Friday afternoons on AudioRoad Network. All episodes are available to listen to for free.

When it comes to eating right, Jeff’s advice is “be prepared” and “eat real food”. He defines “real food” as food that is not overly processed, generally speaking. Fresh is best, so Jeff recommends stocking up before you hit the road. A grocery store is often a short walk or jog away, giving you another great way to get some exercise and save yourself from eating unhealthy food.

Jeff sees the benefit in not only physical health, but also in mental health. Starting a cycle of health and positivity can be done, and Jeff has proved it!

Jeff Throssell is the owner of Nadrok Ventures, a gravel hauling business in Moose Jaw, Saskatchewan. He and his family have been buying Arne’s trailers since 1975.