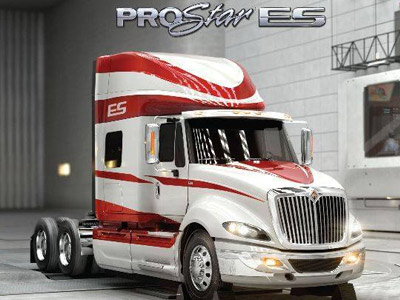 Based on the existing International ProStar, the ES version brings together a collection of specifications aimed at maximizing fuel economy. These include Navistar’s most fuel-efficient aerodynamics and powertrain packages, as well as support from its Performance Engineering Team and three free years of monitoring through its OnCommand Connection remote diagnostics platform.

“The ProStar ES takes us to a new mark in fuel efficiency, but it also does more,” said Jodi Presswood, vice-president and general manager of Navistar’s heavy-duty product line. He said the new package will get up to 11% better fuel economy compared to an EPA10 benchmark: a ProStar equipped with a MaxxForce 13 engine and 10-speed manual transmission and standard fare when it comes to things like tires.

The idea behind the ProStar ES, according to Navistar officials, is to give customers the most fuel-efficient spec’ possible with little or no modification required.

While the exterior of the ProStar ES looks no different than existing models already on the road, it was designed with the concept of “wind averaged drag coefficient” in mind, giving it an edge over other trucks in crosswind conditions, according to Aaron Peterson, chief performance engineer.

He said the ProStar ES “outperforms the competition in virtually any wind conditions out on the highway,” adding the “higher the yaw angle of the wind, the better the ES performs versus the competition.”

Navistar is bringing to the ProStar ES two optimized powertrains that it says will provide a 3-6% fuel economy improvement over previously available engine/AMT combinations. They include the International N-series (or MaxxForce) 13L engine with the Eaton Fuller Advantage 10-speed automated manual transmission and the Cummins-Eaton SmartAdvantage powertrain, which mates that same transmission with the Cummins ISX.

These powertrains deliver fuel savings via downspeeding, which reduces the engine speed for improved fuel economy.

Some of that 3-6% improvement in fuel mileage is attributed to an 82-lb weight reduction Eaton achieved by eliminating the transmission’s oil cooler.

“The most impactful change though, is the level of communication between the engines and transmissions and the optimized shift calibrations that have been developed between the two,” Peterson said.

While most of the components featured on the ES were already available from Navistar a la carte-style, it is now also offering with its ProStar ES individualized support from Navistar’s Performance Engineering Team. These aerodynamic and drivetrain experts are “available to meet with customers to tailor the specifications to each customer’s specific drive cycles and applications,” Peterson said.

The ProStar ES was shown for the first time at the American Trucking Associations Management Conference & Exhibition in October and has been deployed with several fleets for on-road testing.

“We have customers already running this spec’ today and they say it outperforms every other truck in their fleet, including other makes,” Presswood said. “We are confident in the performance of this vehicle, and that the ProStar ES will serve as an ever evolving and improving platform for the industry’s best fuel efficiency components and technology.”

The ProStar ES will be available for order beginning Dec. 15.