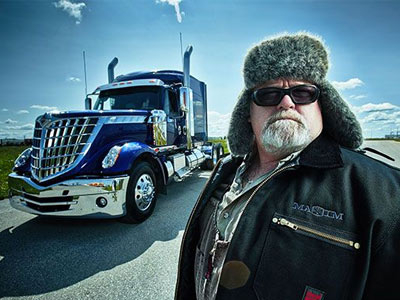 Maxim Truck and Trailer signed a one-year sponsorship deal with VP express and Hugh ‘The Polar Bear’ Rowland, the face of The History Channel’s Ice Road Truckers. As a part of the sponsorship deal, Hugh will be featured at Maxim sponsored events.

VP Express, based in Winnipeg, is the home of the Ice Road Truckers. Established in 2007, VP Express focuses on winter road oil field transportation applications. VP Express first partnered with Hugh Rowland in 2012 and has experienced significant growth ever since.

Hugh has been a long time driver, tackling his first winter road when he was just 15. For 30 years, Hugh has been driving International trucks, from 9900’s to his most recent purchase, a 2015 LoneStar from Maxim’s head office in Winnipeg. He cites their durability and toughness on the ice roads as the reason for his loyalty. “My International LoneStar, and Maxim Truck & Trailer are Ice Road Trucker approved!” said Rowland.

Keep an eye out for Hugh at a Maxim event near you!